A general Thank you! here since I don't do that on every comment. I only reply if I have something specific to say, but all your comments are appreciated! While I probably won't be able to stop creating as long as I play the game, your lovely comments are part of what makes the extra time for sharing worth. :)

( Collapse )
Have you seen a TS3 conversion of my stuff? Please point me to it! :) 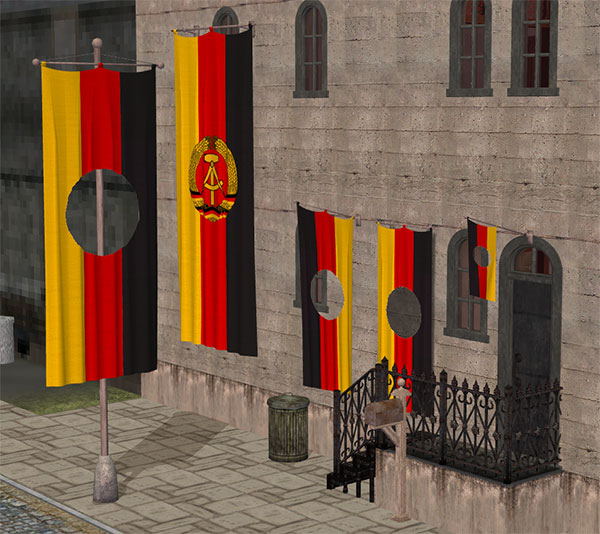 Hey, look at that, I made something for Sims again! :D Just a little treat for now, I'm not really back, yet.
There was another Steam sale, this time Cities: Skylines, need I say more?*

Anyway, I usually don't do stuff that is specifically German, but I had this idea just at the right time. :)
Today, on German Unity Day, we celebrate the reunion of East and West Germany after four decades
of separation. The reunion became official on October 3rd, 1990, roughly a year after the famous fall
of the Berlin Wall (November 9th, 1989). In those days you could see a lot of formely GDR flags which
had the GDR's emblem cut out, a wonderfull symbol for getting rid of an oppressive system.

This is a recolor for my old flags project. You will need the meshes from that and also the historic flags
if you want the original GDR flag, too. Find those here: http://psychosim.livejournal.com/11964.html
Because of technical limitations the shadows of the pole and wall mounted flags don't show the hole.
DOWNLOAD (SFS)

*Cities: Skylines > Actually I need to say more, because it's on sale again for the next few hours! :D
I love watching the traffic go like little ants. The economic side of the game is not all that challenging
but if you just want to build the perfect ciy in peace you're only one button away from unlimited money.
The game also comes with a hard mode and there are loads of mods to add challenge if that's more to
your liking. There are all kinds of mods for other stuff, too, obviously.

I would say the game is worth the full price and a steal right now! Especially if you're interested in the
extra items of the Deluxe Edition which can be considered pricey otherwise.
I also give my full endorsement to the After Dark DLC that adds several useful and game enhancing
elements. The Snowfall DLC not so much, only get that if you really love snow. The biggest draw for me
is the tram but until the DLC gets cheaper I'll make do with locomotives that look like trams.

Must have mods:
Traffic Manager fixes the unfortunately stupid AI, the biggest annoyance of the unmodded game, and
gives great tools for traffic improvements. (Better AI must be activated separately in the mod options!)
Rush Hour is great to bring your city's life more in sync with the time of day and adds events that cause
traffic to certain buildings. The daily workers' commute will put your street system to the test!
Network Extensions Project provides you with very useful extra roads, such as the small four lane road
for when you really need to upgrade a normal road but don't want to demolish the buildings next to it.

Hello! I’m alive! End of declaration. ;) I guess I should post a quick rundown of events because I’ve not been around at all for a long time and have no idea when I will be really back into Sims and the community. TLDR: No accidents or the like, just involved in other games; graphics card broke, new PC on its way; time of comeback uncertain but there will probably be beta-stuff.

Long version: I started the year with the original S.T.A.L.K.E.R. Still good! Unfortunately there was a bug when I entered the last level. Oh well, I'm more the type for the free-roaming gameplay before that, anyway. Then there was a month or two of playing Tropico 3. Finally beat all the missions, except the last one for world domination.
After that I got into modding Fallout 3. I was pretty content with the vanilla game for years (haven’t even touched New Vegas yet which I purchased at the same time), but mods make it so much more immersive and challenging. And there are so many of them! I literally spent a month just going through the nexus and bookmarking my favourites. It was daunting at first to learn the tools for modding yet another game, but meanwhile I’ve got the hang of it and am now in the process of combining all my mods and tweaking everything to be just the way I want.

But oh no! While testing stuff suddenly my Fallout didn’t work anymore! My graphics card broke after serving for seven years. The other hardware of my PC hasn’t been updated in 6.5 years, either. The oldest part, my CD drive, is 12 years old! Sometimes when it revs up I’m worried it might disintegrate. So I took this as the time to start anew. After all, this spring I was able to pay back my student loan all at once on my own - no parental credit required - netting me a four-figure discount. I say I have rightfully earned a big reward. :) My new build won’t be the best and latest tech (Intel Core i3 6100 2x 3.7 GHz, NVIDIA GeForce GTX 950) but it will feel like a lightyear ahead of what I’m used to. It should even be able to play Fallout 4 decently at high settings, but that’s a few years down the line when I’m bored with FO3 and NV. First I’m looking forward to playing all my favourite old(er) games at the highest of their potential! :)
One of these games is GT Legends, which I also got back into after not playing it for two years or so. I have lots of mods for that which still need some tidying up, and there’re two years worth of mods I need to catch up on. I was also starting to make my own retextures back then and would like to get back to that, although I’ll probably have to relearn how to get those into the game. And finally there was SPORE on sale at steam, so I have that installed, too, and if you have any idea about SPORE you already know what kind of time sponge that game can be.

Usually when I’m not in the mood for Sims I still stick around, but somehow it didn’t work out like that this time. What can I say, a day only has so many hours and modding of any game eats a lot of time. It seems 2016 will just not be a Sims year for me. Fear not, though! All those other games I mentioned are different genres. When it comes to building structures and worlds, letting pixel people live in them and enhancing the experience with custom content all in one I see no challenge for our beloved Sims. :) When I’m in the mood for that kind of stuff I will be back. While my FO3 modding was thwarted by my graphics card failure I already got back to the Space Container Hull project for a bit and have been working on literally hundreds of recolour options, mostly for the inside so our space colonists don’t have to stare at blank metal walls. The building set still lacks a few pieces to really cover all possibilities, but since I might not finish it this year I will probably prepare a beta upload. I will need help with hundreds of matching walls for the recolour options, anyway, else I’ll lose my mind. Setting that up requires time as well, though, that will not be very soon. In a month maybe.

So long, see you later! 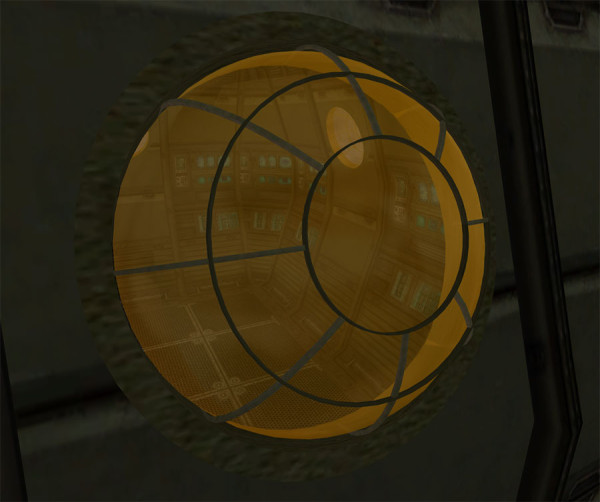 Update! For the last few days I've been working on this project again. I turned around all the meshes I had so far so the catalog thumbnails will show the inside when you use the design tool. Because the way I plan it there will be a lot more recolours for the inside. Then I learned the importance of the south/north parts of windows. If you do it wrong like I did parts of the inside will have that blue hue at nighttime as if they were outside, and vice versa. So I had to do some cutting and refitting. And of course the way maxis designed windows the meshes for the north and south part can't be in your mesh program like they will be in the game, instead they have to be at different offsets. Ugh! That also makes it rather fiddly to line up the corners' edges just right. I still have to fiddle some more with the corner in these pictures. On the bright side I tried out an idea I had for a long time and am very pleased with this roof dome window: 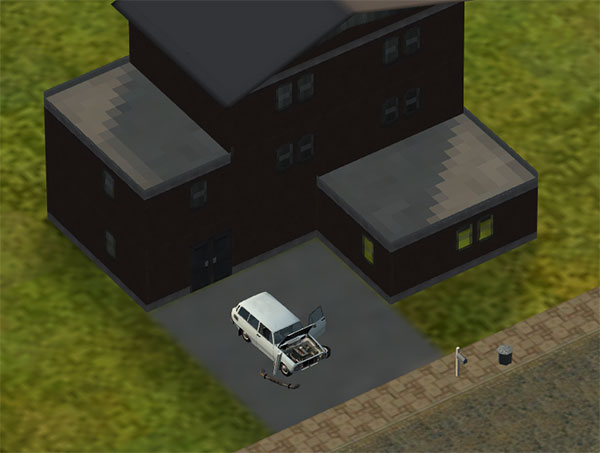 It's been so long since my last upload here, I hardly remember how to operate LJ. Oops! Anyway here're some new colours of Whisper's perfect brick wall! The borders on these are a little darker. 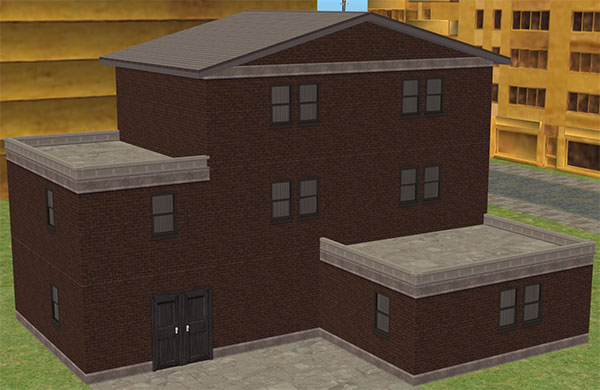 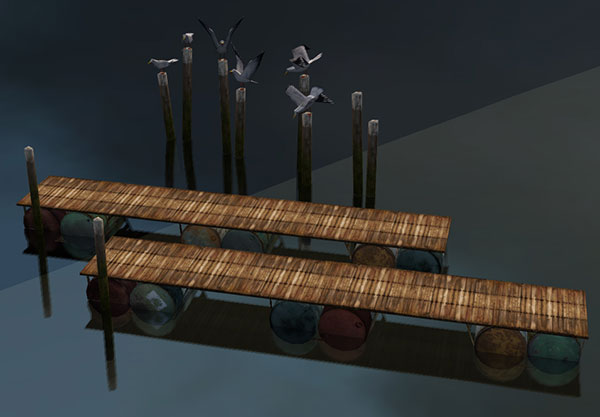 The catwalks and seagulls from my big harbour deco set are now available as lot deco, too!
Converted by Tinkle at blackpearlsims.com

Here's a quick fix for the thumbnails of the party garlands I shared in the beginning of this year. After you replaced the old files with these you'll still have to update the thumbnails in the game manually, however, but that's easy: Simply hold CTRL and right-click on each thumbnail.

If you have a similar problem with other thumbnails you should read this Fixing Thumbnails tutorial by HugeLunatic. She has loads of useful information on her site! :) 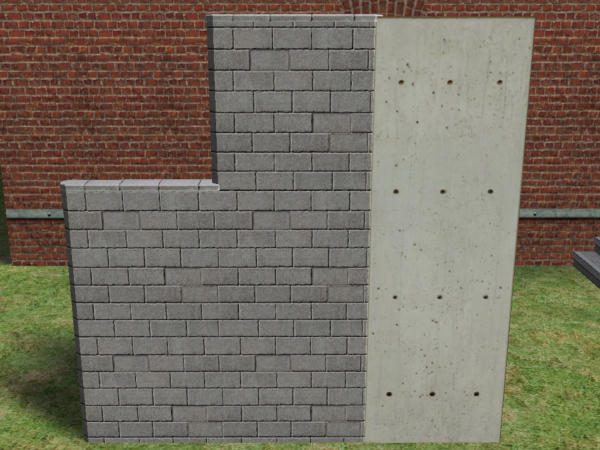 Another find from GoS's Granted Wishes that seems to have flown under the radar. Aki Kaminari has stretched the Bigpartisan Fence to wall height. Very useful to close the gap between "seamless" lots or to make a very clear statement that visitors are not welcome. :P
Collapse